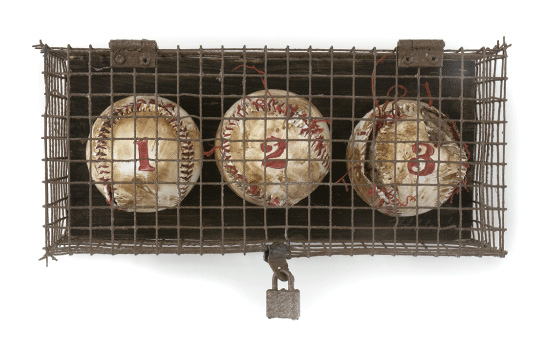 For the past six years Tibbles has produced a series of three-dimensional assemblages using found objects, designed to appear in two-dimensional photographic reproductions on the Op-Ed pages of the Los Angeles Times.

Many assemblage artists over the last century, from the Futurists and the Dadaists around World War I to the Beat and Pop-related artists working during the time of the Vietnam conflict, have used assemblage to make political statements. Susan Tibbles is an assemblagist with a difference. She is charged with making statements about politics with her constructions rather than making political statements. Her pieces function as illustrations or even illuminations, giving concise visual form to the concepts put forth in the articles they accompany. This exhibition will present her original assemblages next to the published the Los Angeles Times version.

Tibbles, self-taught and an accomplished artist with an active career in southern California, caught the eye of Wes Bausmith, the art director for the Los Angeles Times Opinion section, in fall 2000. Her first assignment was to formulate an image that addressed the presidential election between Al Gore and George Bush. Since then, Tibbles has produced more than 140 assemblages for the Los Angeles Times. This body of work, which now resides in the collection of Geoffrey Le Plastrier, documents both the recent political history of the United States and the growth of Tibbles as a creative distiller of political issues through fine art.

The Laband Art Gallery presented a large number of works from Tibbles' Op-Ed series. The exhibition was organized by the Riverside Art Museum and was accompanied by an 95-page, illustrated catalogue with essays by Wes Bausmith, Andi Campognone, and Peter Frank as well as reprintings of a selection of Los Angeles Times articles which were illustrated by Tibbles.

From left to right: