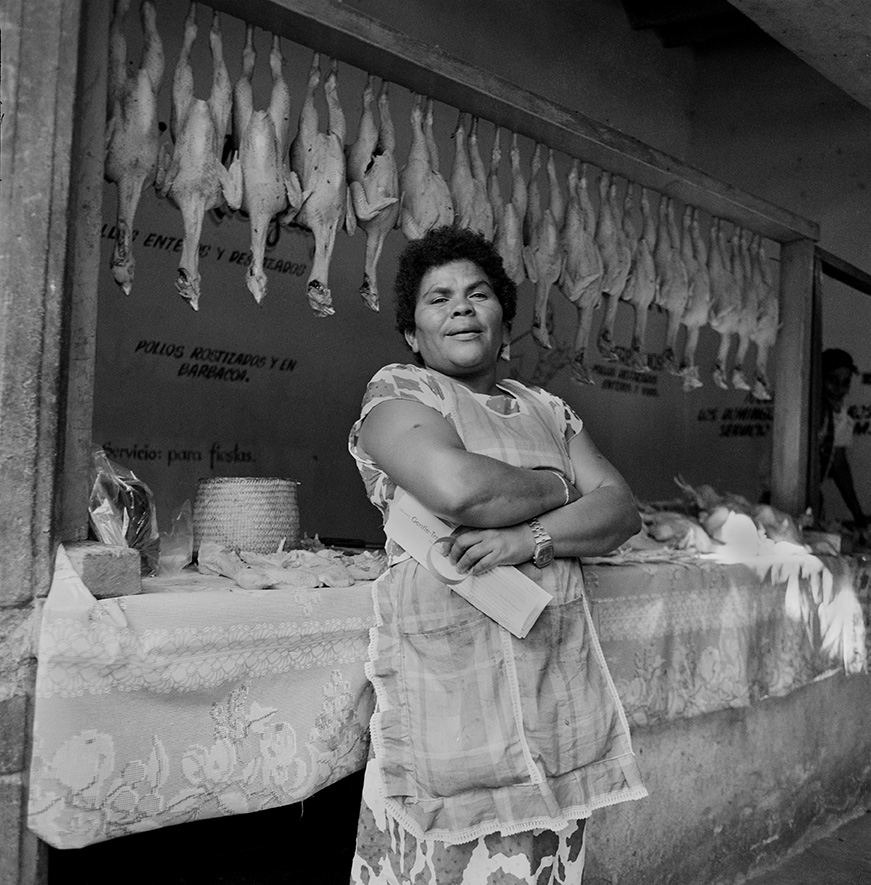 Africa's Legacy in Mexico features forty-five black and white photographs from a series of portraits of African Mexicans by Tony Gleaton. Taken in the late 1980s and early 1990s, primarily in three villages along the southwestern coast of Mexico, Gleaton's photographs offer insight into a little-known aspect of Mexican culture. These poignant images focus on the present-day descendants of African slaves who were brought to Mexico by the Spanish colonialists beginning in the 1500s. Though Africans have been part of the cultural fabric of Mexico for five centuries, the official policy of the Mexican government has been to only highlight the country's mestizo [mixed race] heritage that has resulted from the mixing of indigenous and European peoples. Miriam Jimenez Roman writes that Gleaton's photographs "force us to rethink many of our preconceptions not only about our southern neighbor but more generally about issues such as race, ethnicity, culture, and national identity." This exhibition was held in conjunction with the 2007 Bellarmine Forum I/M/MIGRATION.

Unlike a documentary photographer, Gleaton interacts closely with the people in his photographs, often living with them for extended periods and developing friendships. While his photographs may appear to be candid, quickly recorded images, they are in reality, thoughtfully constructed compositions. Gleaton engages his subjects, often posing them, directing them where to gaze, and carefully arranging the scenes to best tell a story and to bring out emotional interrelationships. He references Western artistic conventions using dramatic lighting, low viewpoints, and compositions reminiscent of religious paintings with the intention of creating images of black people that carry the power of 'classical' images which are universal and timeless.

Throughout his artistic career Gleaton has explored the African Diaspora seeking out the unexpected and untold stories of people who don't fit historical stereotypes. Gleaton has traveled by bicycle, bus, and in his beat-up 1972 Army ambulance throughout North, Central, and South America on this quest. He has lived with cocoa growers in Bolivia and Mexican and Native American cowboys in bunkhouses. He has worked in oil fields and construction on his photographic journeys.

Gleaton brings intensely personal concerns to his work. "The photographs I create are as much an effort to define my own life, with its heritage encompassing Africa and Europe, as it is an endeavor to throw open the discourse on broader aspects of mestizaje, the 'assimilation' of Asians, Africans, and Europeans with indigenous Americans. . ." With his light brown skin and hair, and green eyes, Gleaton has had difficulty persuading his subjects that he is black and that he is interested in them as black people, something many deny. "Black," applied to an individual, is often a pejorative term in Latin America; the darker one's skin—the farther from white—the lower one's perceived status. Gleaton sees this "societal and individual devaluation" as the legacy of colonialism, and his work is, at least in part, an attempt to address this history, an effort at redress: "The most important aspect of these portraits is the giving of a narrative voice by visual means to people deemed invisible by the greater part of society and, in so doing, crafting an 'alternative iconography' of beauty, family, love, goodness... one that is parallel to but outside the bounds of European-based art, one that is inclusive, not exclusive."

Tony Gleaton was born in 1948 in Detroit, where he lived until his family moved to California in 1959. In 1967, at the age of 19, he joined the Marine Corps and subsequently completed a tour of duty in Vietnam. Returning to California after being discharged, he entered UCLA, became interested in photography, and eventually moved to New York, where he worked as a photographer's assistant and briefly considered a career as a fashion photographer. After only achieving moderate success, Gleaton tired of the fashion scene and, in 1981, traveled in the American West, doing odd jobs and photographing cowboys, focusing on Native Americans and blacks. Of this period, Gleaton has said: "That was the beginning of a whole new phase in my life and an awakening for me as a black American... Black and Native American cowboys don't fit the John Wayne image, so history and the mythic tales of the American West never included them." While at work on that series, he was introduced to the Mexican rodeo and began traveling to Mexico from Los Angeles. He shared an apartment with a stunt man from Churubusco Studios in Mexico City 1982 through 1988, Two years later Gleaton established a household with the Tarahumara Indians of northern Mexico. When he learned that small communities of blacks, descendants of the colonial slave trade, inhabited the Costa Chica region, he set out to find them. "When I got there, I found a people without a common mythology. Every village had a different tale of how their ancestors arrived in Mexico. I thought it was interesting that the early presence of blacks in the Americas was rarely discussed and largely undocumented." In 1990, he extended his work to include Central America, and in 1994, he began the South American series. Exhibitions of these series from Mexico, Central, and South America have traveled throughout the United States, Mexico, and Cuba. He is currently working on a series of landscape photographs entitled The Black Route West: Manifesting Destiny which combines imagery with text to chronicle the African Diaspora in territories west of the 96th meridian in the United States, the sovereign lands of Mexico, and the dominion of Canada between 1528 and 1918. (parts of this paragraph and the entire preceding paragraph are excerpted from Majorie L. Heath, "Tony Gleaton," Montgomery Gallery, Pomona College, 1997)

Update: We are sad to say that Mr. Gleaton passed away in August 2015. Read a NY Times obituary about Tony Gleaton.