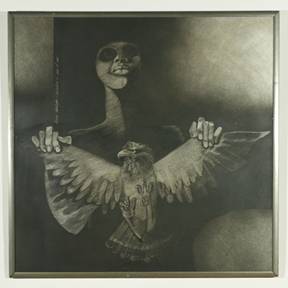 For three brief years in the late 60s, Gallery 32 was one of the few places in Los Angeles exhibiting the challenging work of emerging African American artists, such as David Hammons, Betye Saar and Emory Douglas.

Loyola Marymount University's Laband Art Gallery opened Gallery 32 and Its Circle, the first in-depth examination of the gallery and its role in the greater Los Angeles art world. This unprecedented exhibition will featured many of the actual works exhibited during the gallery's three-year existence, as well as representative works from that time period by artists associated with the gallery. The exhibition presented paintings, sculptures, drawings and assemblages by artists including Timothy Washington, Gloria Bohanon, Senga Nengudi, John Stinson and Elizabeth Leigh-Taylor, along with a selection of gallery announcements, photographs and other gallery materials to add insight into the life of the gallery.

Founded and run by artist Suzanne Jackson in 1968, the gallery was located at 672 North Lafayette Park Place, near MacArthur Park, the Otis Art Institute and Chouinard Art Institute. Coming directly out of African American artist Charles White's teaching of art as a vehicle for community activism and change, Gallery 32 was not just a gallery but a gathering place where issues of art, politics, and society were discussed and explored. Whether exhibiting the Black Panther Party protest art of Emory Douglas or David Hammons' body prints, Gallery 32 was a site to affect social change. The Gallery hosted numerous exhibitions, panel discussions and fundraisers to support minority communities.

As Suzanne Jackson explained, "Gallery 32 functioned as a meeting space for its members to question history, culture, and risky improvisation." As such, its members participated in both the broad political struggles and contributed to the remarkably diverse Los Angeles art activities during that time.

Jackson saw the need for a gallery that would exhibit emerging artists, where they could take chances and experiment with their work. Gallery 32 became such a space. While not intended to showcase exclusively African American art, the gallery evolved into a particularly dynamic venue for African American artists; for example, David Hammons, who was especially encouraging of Jackson to open the gallery, first exhibited his well-known body prints there. The Gallery also hosted significant group exhibitions such as Sapphire, You've Come a Long Way Baby (the first Los Angeles survey of African American women artists) and fundraising exhibitions for the Black Arts Council, The Black Panther Party and the Watts Towers Children's arts programs.

Gallery 32 was an integral component of Los Angeles's diverse art scene of the late-1960s, allowing under-represented artists the space to experiment and exhibit. It became the launching point for many artists and was exemplary of the region's do-it-yourself mentality, mixing aesthetics with broad social ideals. Closed in the fall of 1970, Gallery 32 has largely been forgotten in most art history books, but this exhibition will reintroduce the gallery and its important role in the Los Angeles and African American arts community.

Gallery 32 and Its Circle was organized by Carolyn Peter, director and curator of the Laband Art Gallery, and Damon Willick, assistant professor of modern and contemporary art history, Loyola Marymount University. The exhibition is funded in part by a grant from the Peter Norton Family Foundation, on behalf of Eileen Harris Norton.