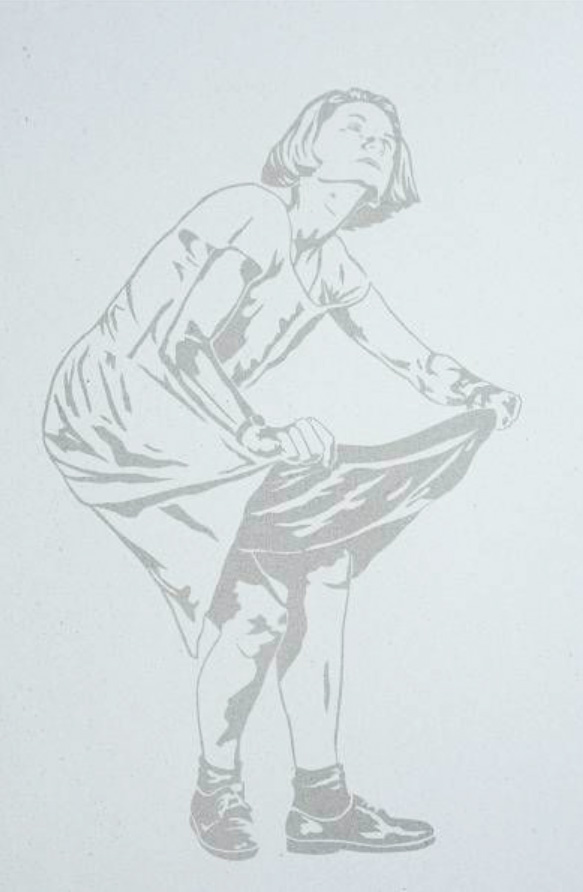 LA artist Kim Abeles mines the urban environment with a great sense of curiosity. She incorporates both conventional and unorthodox media—from using smog particles to quilting with trash—to explore broad social topics. She uses metaphors and humor to bring our attention to crucial issues such as pollution, gender roles, civil rights and even traffic.

The exhibition featured Abeles' broad range of media and innovative techniques and focuses on three broad themes that have served as threads throughout her career: women's lives and women's issues, civil rights, and environmental issues. Some of her most recent work as well as a selection of pieces made over the past three decades will be on view. The exhibition revealed Kim Abeles' keen perspectives on tough social issues and her distinctive style compels us to examine these problems afresh. In Kim Abeles' life and work aesthetics and activism blend seamlessly.

In her series Biographical Portraits (1984-91) Abeles immersed herself in the lives of several notable women from different eras such as Saint Bernadette, the young visionary of Lourdes (1844-79); Mother Ann, the founder of the Shakers (1736-84); and the frontierswoman Calamity Jane (1852-1903). Abeles has said that the Biographical Portrait series "exists on a pivot point between fact and fiction, taking into account the subjectivity of our perceptions and data." In each case, she created at least one large scale sculpture accompanied by auxiliary works such as drawings and maps, that encapsulates different legendary aspects of her subject's life.

More recently, Abeles has creatively explored important current women's issues in her artwork. Her ethereal piece Digit Count In Smog and Us (2010) points to the connection between pollution and breast cancer. The large-scale multi-panel work, made using her unique process to capture particulate matter (smog) on cellulose, shows a different circle for each 1,000 women who were diagnosed with breast cancer in the past year. The random placement of the circles on each panel speaks to the lack of control we have over the disease. Domestic violence is the subject of Pearls of Wisdom (2010), a collaborative project, organized by Window Between Worlds, where Kim Abeles works with female victims from shelters statewide. It uses the pearl, a treasure inside an oyster, as a metaphor to explore how survivors of domestic violence can grow beyond these experiences to live healthy, positive lives.

Human rights are another thread that weaves through much of Abeles' art. Two of her most powerful works focus on African Americans and the Civil Rights Movement. To Sit As Ladder (In Honor of Rosa Parks) (1991) is a chair that has been altered to create a ladder; the rungs of the ladder/chair are filled with text giving quotes and a chronology describing the life of the Civil Rights activist Rosa Parks. Documents K-12 (2004) highlights the landmark 1954 Supreme Court decision that made racial school segregation illegal throughout the United States. Abeles created a table covered with felt and inlaid with objects related to education and the struggle for equal education for everyone. The round, green felted table reminds that like poker, education is also a game of chance. Several poignant works on the subject of the AIDS epidemic will also be presented.

Some of Abeles' best known works revolve around the subject of environmental issues. Since the 1980s, Abeles has combined her artistic talents with her personal commitment as an activist to create powerful works that tackle environmental issues. Abeles developed several systems to sample and measure air quality which eventually led to her Smog Collector series, a project/process that is ongoing. She places adhesive materials and plexiglass overlaid with stencils on roofs around the city for extended periods to collect particulate matter, i.e. smog. When she removes the stencils a design made from smog is left. Along with Digit Count, this exhibit presents a number of other "smog pieces" made including Earth Clock II (1998) and Zoe's Highchair (1991). These pieces convey a striking message with humor and ironic beauty.

Abeles exposes other environmental and urban issues via her artwork in recent pieces such as Dodger Stadium (2007) that maps the actual location of the relatively few trees in downtown LA, as well as Signs of Life (2007) which maps the locations of homeless encampments in downtown LA. The Great Periodic Migration (1983) humorously comments on LA's traffic problem by replacing cars and the humans who drive them with rows and rows of cicadas that you can almost hear buzzing over the photo of one of LA's congested highways.

The exhibition reveals Kim Abeles' indefatigable compassion and curiosity. She digs deep into each subject that she takes on. With sensitivity and innovation she finds ways to express multiple perspectives about tough, large social issues. Her distinctive style and humor pulls us in and gets us to examine these crucial problems afresh. In Kim Abeles' life and work aesthetics and activism blend seamlessly. 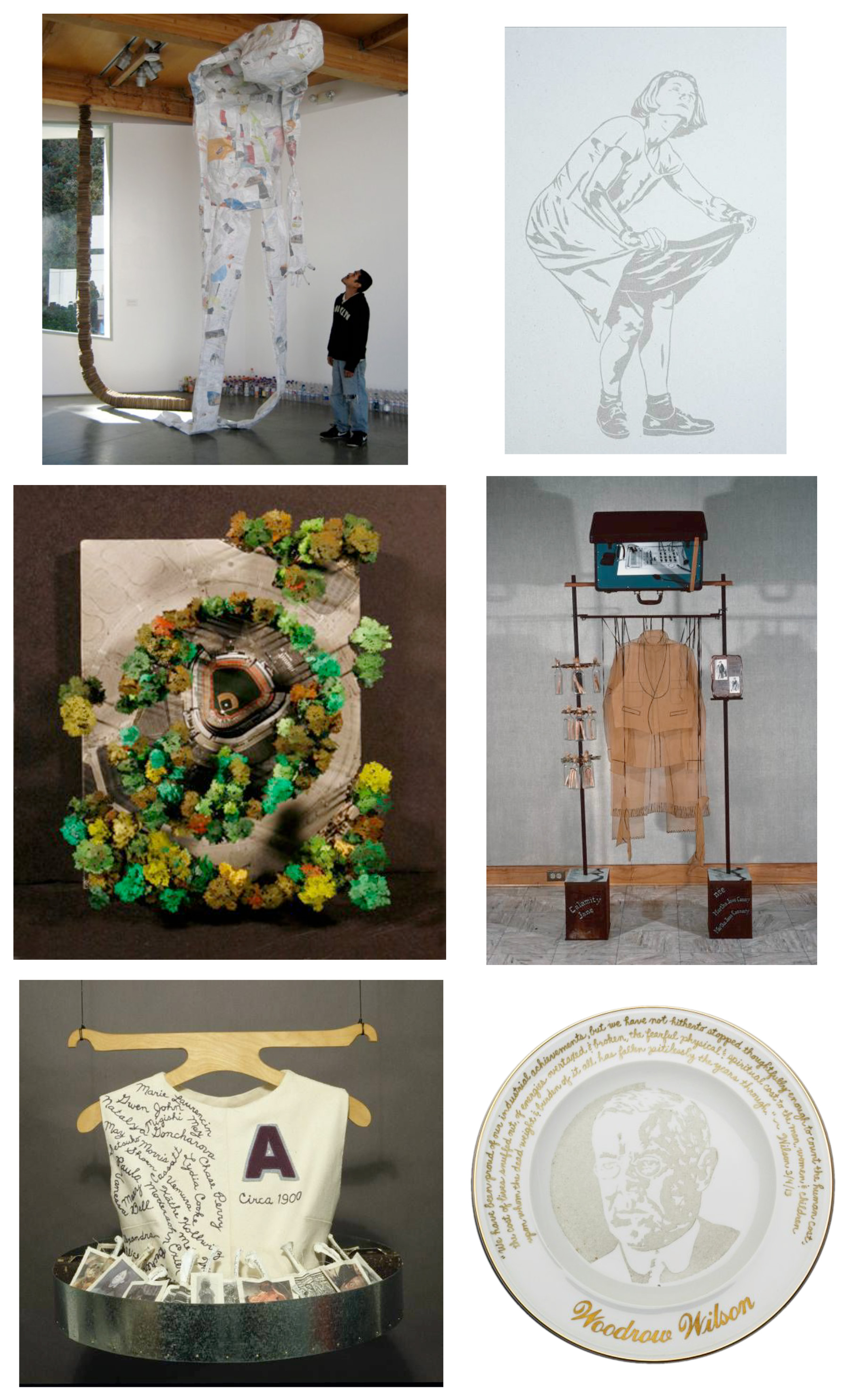 Kim Abeles was born in Richmond Heights, Missouri in 1952. She received her BFA from Ohio University and her MFA from University of California, Irvine. The Smog Collector series brought her work to national and international attention in the art world, and mainstream sources such as Newsweek, National Public Radio, CBS Evening News, and The Wall Street Journal.

A mid-career survey curated by Karen Moss and sponsored by the Fellows of Contemporary Art for the Santa Monica Museum, Kim Abeles: Encyclopedia Persona A-Z, toured the United States and South America, and was awarded the Best Regional Museum Show category for 1993-94 by the International Association of Art Critics. She continues to exhibit internationally, including recent projects in Vietnam, Thailand, Czech Republic, England, and China.

She represented the U.S. in both the Fotografie Biennale Rotterdam and the Cultural Centre of Berchem in Antwerp.

Her work is in numerous private and public collections including the Museum of Contemporary Art; United States Information Agency; Los Angeles County Museum of Art; Yucun Art Museum, Suzhou, China; Sandwell Community History and Archives, U.K.; and is archived in the library collections of the Museum of Modern Art and the Cooper-Hewitt Publication Design Collection of the Smithsonian. Abeles work was awarded grants from the Andy Warhol Foundation and Peter Norton Foundation and fellowships from J. Paul Getty Trust Fund for the Visual Arts, Pollack-Krasner Foundation, and the California Arts Council.

The exhibition was curated by Carolyn Peter director and curator of the Laband Art Gallery. Generous loans to the exhibition have been made by the California African American Museum, the Museum of Contemporary Art, Los Angeles, and a number of private collectors. The exhibition's related events were supported in part by the Bellarmine Forum, 2010 and LMU's Dance Program.