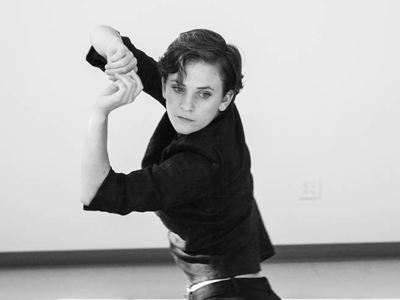 Andrea Parson began her early dance training in Hillsboro, Oregon, at Northwest Conservatory of Dance under the direction of Anita Mitchell. She received her B.A. from Loyola Marymount University in Los Angeles in 2008. Andrea has taught dance throughout Oregon and Washington, and has participated in workshops with the Joffrey Ballet, San Francisco Conservatory of Dance, anoukvandijk dc and NW Dance Project.

In June 2010, Dance Magazine named Andrea their dancer “On the Rise.” The following month, Andrea received her biggest career honor to date, winning a 2010 Princess Grace Award for Dance and she appeared on the cover of Dance Spirit Magazine in February 2011, which did a feature on her and another on the company.

What is something you gained from the LMU Dance Program that is still with you today?

To dance is human. Dance is more than movement, but also story and culture. As a performer, teacher, and choreographer I seek to find the deeper stories behind the dances that we do.

What creative projects are you currently involved in?

I am currently performing a site specific project with Northwest Dance Project, as well as a short film. The project involves learning a 45 second solo from 4 different choreographers, which include Wei Wei Wang, Ihsan Rustem, Luca Veggetti, and Didy Veldman.

How is dance meaningful to you, and how has it influenced your artistic goals?

To me dancing is a spiritual exercise. It reveals deeper truths about my life that I might otherwise be unaware of. Through dance, I am able to shine light on places of darkness such as uncertainty and grief. Words cannot express everything. Dance allows us to express wild and inexpressible things. My goal is to tell original stories through dance and theater, and also to create space and guidance for others to tell their stories through both body and voice.