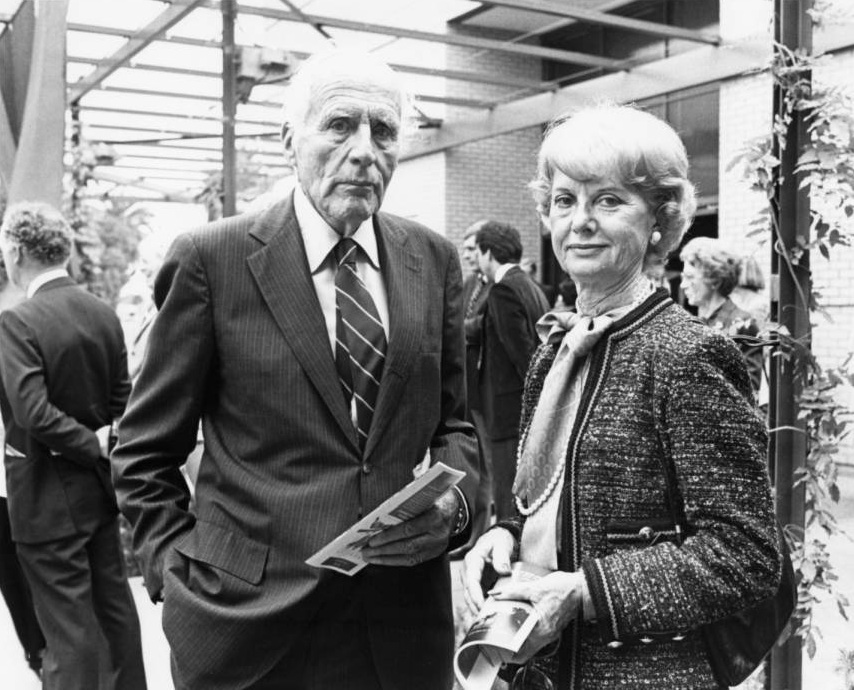 Walter and Francine Laband at the opening of the Laband Art Gallery, c.1984. Image courtesy of LMU Archives

Francine Lombard Laband, and her husband Walter, founded and established an endowment for the Laband Art Gallery in 1984. Over the past twenty-five years, up until her death in January 2010, Francine supported the gallery, making its rich programming possible. She also contributed to the fund that created Thomas P. Kelly Jr. Art Gallery in 2008 which further enhanced the cultural life of Loyola Marymount University. She was also a member of the CFA Council, the Clavigerii Society at the University, and was a Presidential Associate.

Born Francine Georgette Lombard, she was the fourth daughter in a family of six girls who grew up in Versailles, France. She studied at the Sorbonne in Paris and later became a MASH unit nurse for the Allied drive into Germany. Following the war, she married Walter Laband, a British Army Intelligence Officer serving in Versailles. Eventually, they relocated to the San Gabriel Valley in Covina, California. Francine was a generous patron of the arts as well as a donor to charities and schools. In recognition of her generosity over many years, Francine was knighted a Dame of Malta, a Dame of the Holy Sepulcher, and a Dame of St. Gregory by the Vatican. Her late husband was a Knight Commander of St. Gregory, a Knight of Malta, and a regent at Immaculate Heart College.

Francine G. Laband died peacefully at her home in West Covina on January 4, 2010, surrounded by her loving family. We will remember Francine's intelligence, her passion for the arts, her generous spirit, her love of France, her steadfast support of and interest in young students, and her elegant and kind manner. We greatly benefited from her insight and critiques. She will be sorely missed by those who knew and loved her. Read her memoriam.

Please check current exhibition info prior to your visit. The Laband Gallery is closed between exhibitions.