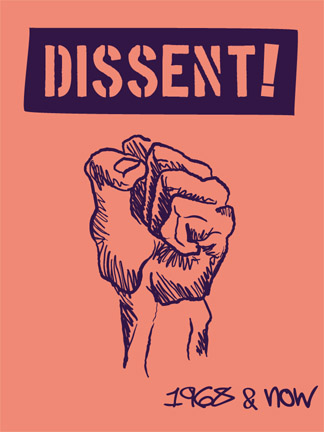 In honor of the 40th anniversary of the global student uprisings of 1968, Dissent! 1968 and Now examines the oppositional power of art. The exhibition features some of the most influential images of protest from 1968, including works by the French Atelier Populaire, Sister Corita and Rupert Garcia. Students from eight of Los Angeles' prominent art schools (LMU, CalArts, Cal State Long Beach, Occidental, Otis, UC Irvine, UCLA and USC) have also been invited to confront mainstream media, political practices and other issues affecting the contemporary world. The works will be selected by well-known Los Angeles protest artist Robbie Conal along with co-curators Erik Benjamins, a senior at LMU, and Carolyn Peter, director of the Laband Art Gallery.

The historical works explore the controversial issues that brought things to a head in 1968. Student organizers quickly discovered the power of visual imagery to effectively convey their viewpoints to a broad audience. In Paris, students established the Atelier Populaire (the People's Workshop) to churn out posters they plastered throughout the city. Their simple, strong designs passionately called students, workers and others to fight against the universities' and the country's bureaucracy to bring about sociopolitical change. Work about the Vietnam War, African American's rights, women's rights and environmental issues by students from Mexico, San Francisco, Oakland, Los Angeles, Detroit and Ohio are also on view.

With the historic context of 1968 as a takeoff point, this exhibition jumps forward to the present to ask: how are Los Angeles university art students engaging with the world around them and how do they create dissent in their art? Some of the same topics are on the minds of students in 2008. As in 1968, the United States is currently embroiled in an unpopular war, an American presidential election looms, and the younger generation feels disconnected from the older establishment. Certain works in the show examine gender issues and question mainstream media's relentless reinforcement of rigid ideas of what it means to be masculine or feminine. Other pieces call for Black empowerment or challenge the many labels—ethnicity, gender, religion, nationality—used to pigeonhole people in our society today.

The students' concerns do not stop here. A number of the works of art express outrage at the human right struggles in countries throughout the world. In the late 1960s, Rupert Garcia created a poster that powerfully conveyed the dangers of DDT; the environment is still a concern for student artists today. Others look back in history at horrific events such as the Holocaust and the bombing of Hiroshima hoping history won't repeat itself. Significant and varied topics such as immigration, the pressures of capitalism and the over-prescription of drugs also are highlighted in this show.

Bringing together work from 1968 and 2008, this exhibition begs larger questions and comparisons. Even with the incredible developments in technology, are students around the world united in issues of dissent in the same way students were in 1968? Has the power of the visual image lessened since 1968 with the bombardment of imagery in the media today? How has protesting changed and why? Finally and most importantly, can art still effect change?