The Presence of Absence: The Photographs of Richard Ehrlich 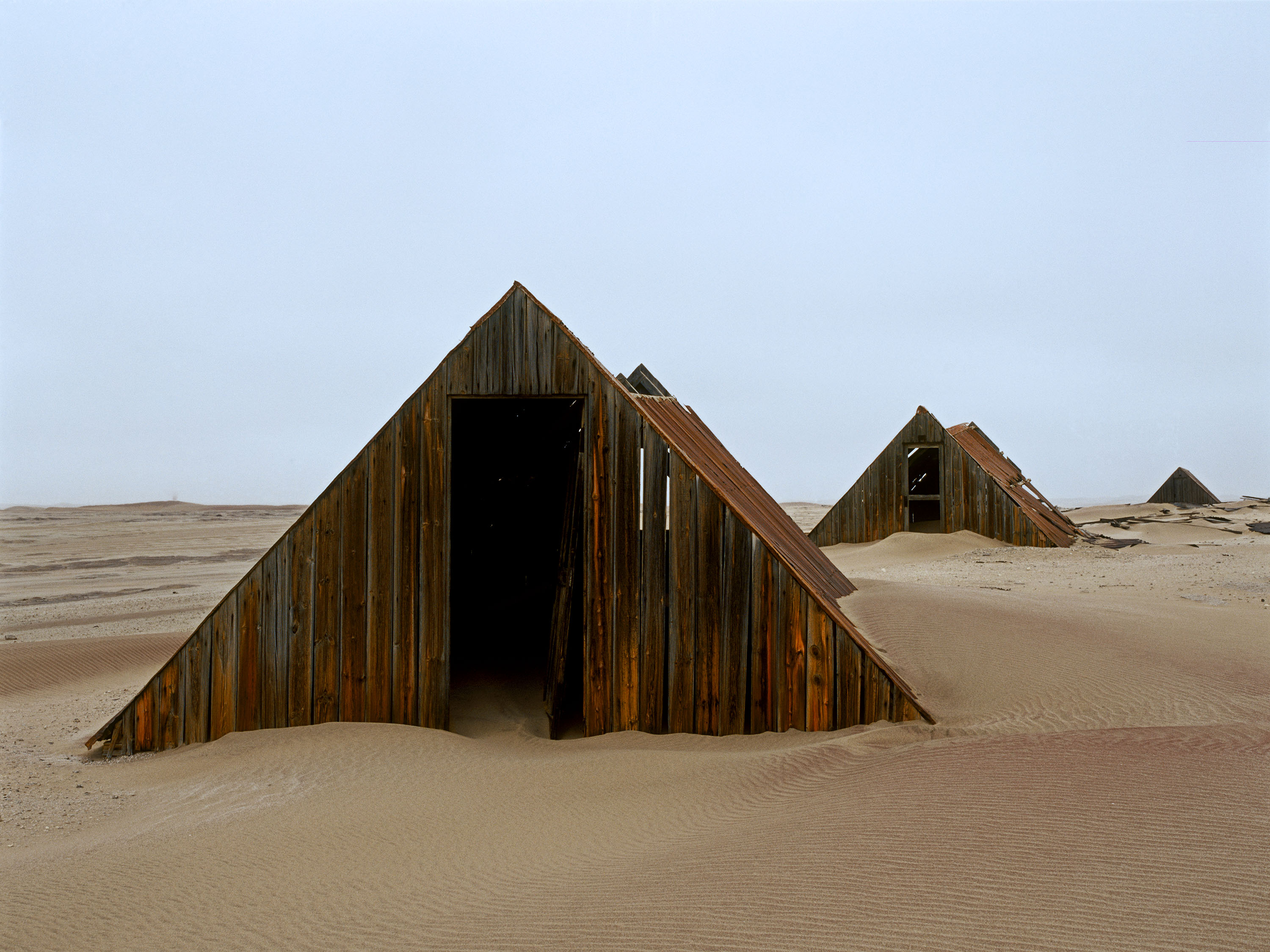 Richard Ehrlich does not photograph people, yet their existence is keenly felt in the ordinary objects and structures he depicts. His haunting, color-saturated images evoke lives lived and remind us of the vulnerability we all share.

Ehrlich's Namibia Sand Houses and Diamond Mines series offer hauntingly beautiful perspectives of the remains of a thriving mining community in the early 1900s. In April 1908 diamonds were discovered under the sand's surface in Southern Namibia. The German colonial government soon designated this area a "forbidden zone" or "Das Sperrgebiet" in order to control the region. By 1920 Kolmanskop had developed into a vibrant village of German expatriates with a hospital, a bowling alley, casino, concert hall, bakery and power station. More than 1,000 kilos of diamonds were extracted before World War I. There are descriptions of men crawling through the desert on their bellies under the light of a full moon sifting through the sand in search of glimmering diamonds. Despite the initial rush, by 1928 large diamond deposits were discovered elsewhere and the houses and mining operation were soon abandoned. To this day "Das Sperrgebiet" is still a forbidden zone.

Ehrlich's photographs of the sand-worn buildings and the severe landscape are surreal. One perplexing image shows the rusted shell of a large ship lying like a beached whale on the desert floor. How did it end up in the middle of a desert? Other pictures present the bright, sensitively-painted interiors of the relatively luxurious homes that belonged to the managers of the mines. The rooms are filled with undulating dunes of sand that have blown in over the last eighty years. In contrast, another photograph shows small, ragged wood shanties that each housed a dozen African diamond mine laborers; they emerge out of the sand like Egyptian pyramids. Ehrlich's photographs invite their audience to confront the harsh realities of human beings' capacity to exploit each other as they chase symbols of consumption. Likewise they remind us of the temporality of human existence.

Closer in time and geography, the series on Los Angeles' Belmont Park present the cacophony of neon colors that cover every imaginable surface. Over the past three decades underground artists left their mark on an abandoned electric substation for the city's Pacific Electric Railway trolleys. The dazzling colors and dynamic forms in the murals are in drastic contrast to a gritty floor littered with garbage and used spray-paint cans. A darkened tunnel, also covered in graffiti, ominously leads the viewer into the unknown, revealing the layers of lives this space has hosted. Ehrlich came to photograph the park in 2004 after learning of its imminent demise. He was able to capture the site's vibrancy and sense of danger while its life as an artistic canvas was hanging by a thread. One can almost hear the hissing of the spray cans and the rowdy banter of artists conversing. Sadly, the park was demolished to make way for an apartment complex weeks after Ehrlich visited.

Like the Belmont Park images, Ehrlich's Cook County Hospital, Chicago series gives the sense that the individuals who inhabited the space hurriedly abandoned it only moments ago. The Cook County Hospital was built in 1874 and became known for being the world's first blood bank in 1937. The space was vacated in 2002 when the staff and patients moved to a new state-of-the-art hospital. The old medical equipment, the furniture, and the reams of documents left behind hint at the bustling, overcrowded hospital this once was. The former inhabitants left the scene relatively in tact; echoes of their voices and footsteps still remain embedded in the objects they had touched. Ehrlich's images contradict our expectations of a hygienic healthcare facility by highlighting the decay: paint peels off the walls, pipes are rusting, a gurney sits in a puddle of toxic-looking water. One begins to wonder if these problems already existed when the hospital was running in full gear. The images highlight the problems plaguing the U.S.'s entire healthcare system. Ehrlich's photographs also poignantly emphasize the vulnerability of humans in spaces focused on the caring and healing of individuals.

In Ehrlich's series Pa'ia Sugar Mill, Maui the factory's dilapidated remnants come to stand in for the many individuals who once worked there. The original sugar mill was built in the 1880s with the town growing around it. Similar to the Namibian diamond mines, the company built camps for its workforce of Native Hawaiians, Chinese, Filipino, Japanese, Korean, Puerto Rican and Portuguese immigrants. Eventually, Maui's tourism industry surpassed sugar production in revenues and the mill was closed in 2000. The demolition of the mill commenced in the summer of 2006 soon after Ehrlich had visited. Ehrlich isolates different elements of the factory's imposing architecture and immense machinery in each photographic frame, giving the viewer the opportunity to contemplate the vestiges of an environment that was filled with commotion. Abandoned white dunes of sugar—the mill's prized commodity—recede far into the distance. Oversized, rusted cogs are frozen still. A vibrant sign warning of the potential dangers stands in front of a wall of figures charting the actual accidents - real dangers were ever-present in this factory.

For his series Holocaust Archives Ehrlich did not return to the sites where the atrocities took place. Rather, he went to the International Tracing Service Archives in Bad Arolsen, Germany where more than 50 million documents and artifacts (16-miles worth) offer evidence of the horrors of the Nazis' campaign to eradicate Jews and others who they found to be defective or undesirable. Using a 39-megapixel Hassleblad, Ehrlich photographed the sheer volume of material in the archives. Shelves filled with binders filled with names, these meticulously organized objects and pieces of paper, represent the 17.5 million individuals who were displaced, persecuted, and/or murdered during the Holocaust. The Nazis' attention to detail in their record keeping is shocking. One of Ehrlich's images shows a mundane list of the numbers of lice removed from individual prisoners. Ehrlich describes this orderliness as "the banality of evil," quoting the author Hannah Arendt. Photographs of a record card for Anne Frank, prisoners' family snapshots, watches and beautiful pens confiscated from prisoners bring the overwhelming mass of documents down to a very personal, individual level.

These five series by Richard Ehrlich challenge viewers to ponder large questions about what it means to be human. His photographs pay honor to the individuals who lived in these environments. Ehrlich focuses on subjects whose vulnerability exposed them to exploitation and underscores how humans have failed to value each other. 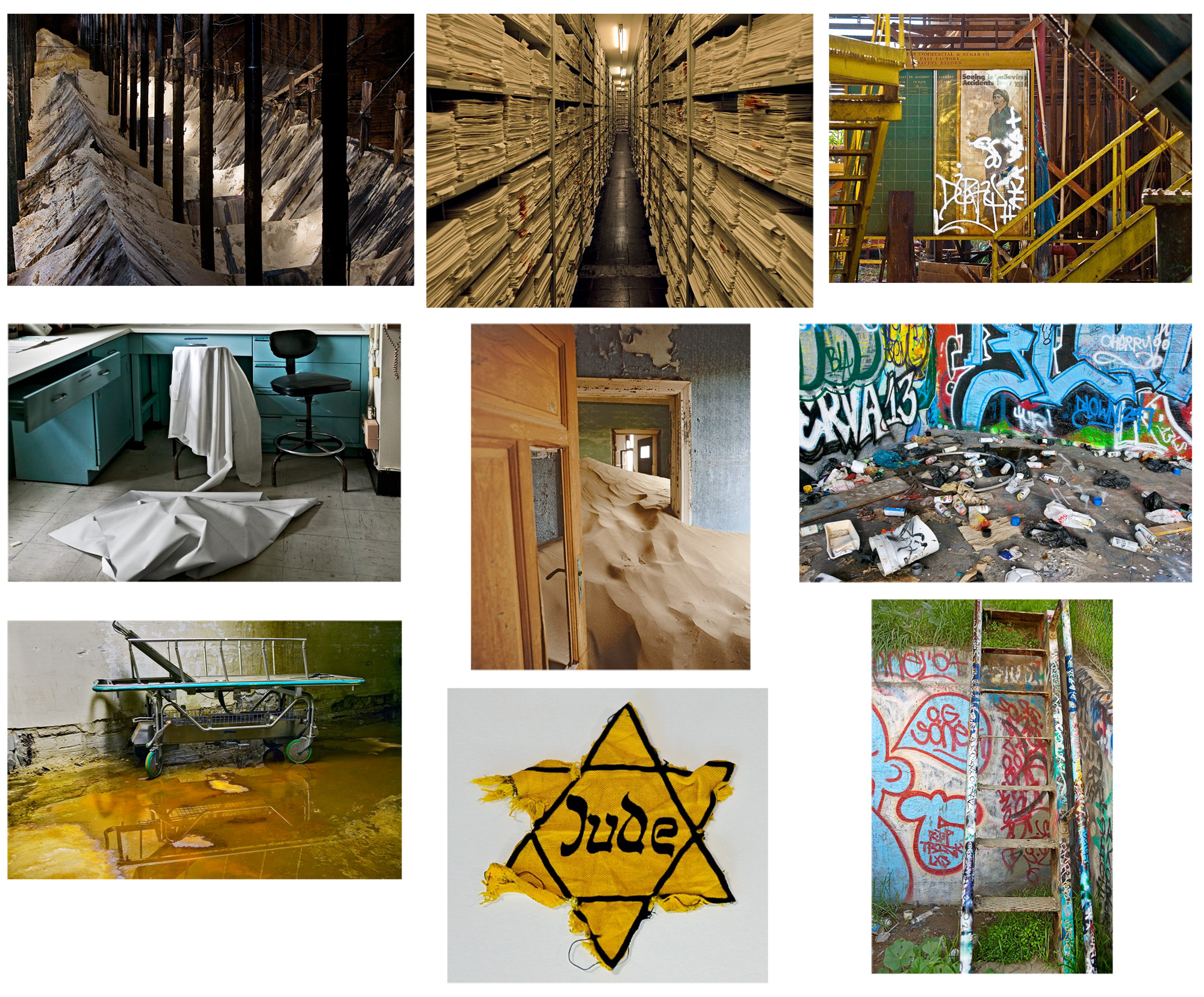 From top-left to bottom-right:

Richard Ehrlich was born in New York City in 1938. He graduated from Cornell University and Medical College and has lived in Los Angeles since 1971. He fell in love with photography as a child, but put it aside to pursue his medical career. He returned to photography in earnest eight years ago. His work has been shown in galleries across the country and at museums including the Santa Barbara Museum of Art, The University of Buffalo Art Gallery, and the Tennessee State Museum in Nashville and his work can be found in museum collections such as the Grunwald Center for the Graphic Arts at the Hammer Museum, the Los Angeles County Museum of Art, the U.S. Holocaust Museum in Washington, D.C., and the Denver Art Museum.

The exhibition was curated by Carolyn Peter director and curator of the Laband Art Gallery. The exhibition's related events were supported in part by the Bellarmine Forum, 2009 and LMU's Jewish Studies Program.