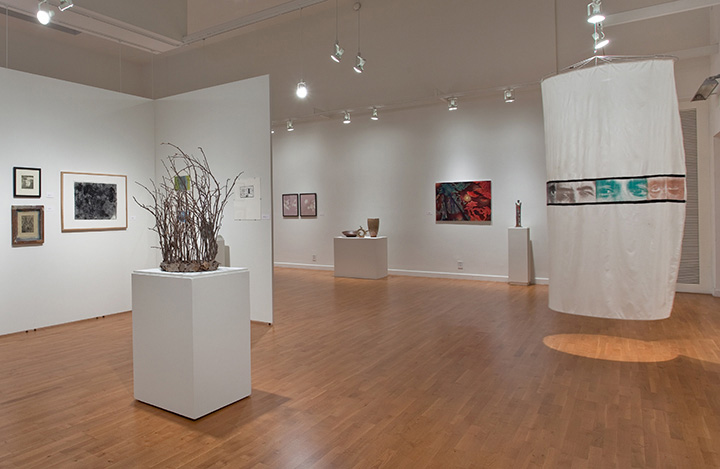 In this still young 21st century, art students are confronted with myriad choices of where and how to engage their creative energies. In an age when digital technologies make global political and socio-cultural information instantaneously accessible, the range of influences, styles, and subject matter is near infinite. Yet, what we found on the outset of making selections for this exhibition was refreshingly personal. Rather than simply surrender to the allure of newly available technologies, the work represented here chooses to examine the deeper cultural ramifications of today's "digital-visual-globalization."

This exhibition presented the work of the 2009-10 LMU Studio Arts majors and students enrolled in studio arts classes at LMU. It showcased a broad variety of media, techniques, and artistic approaches while covering an even wider range of thematic focus and personal outlook. As curators, we aimed at highlighting not just individual works of art, but ensembles that best represent this new creative environment. The thematic sections identified range from naturalistic/organic and cosmic/spiritual concerns to socio-political statements, witty comments on the Pop sensitivities of the 1960's, and an ever-intriguing update of the portrait/self-portrait pose. Collage, installation, language, and found everyday objects are all fair game in this eclectic and always provocative exploration of artistic identity.

As teachers and curators we celebrate our students' struggle to negotiate their place in the world, both as artists and as people. In the future, it is their voices that we look to and, in fact, depend upon, for inspiration, for meaning, and for a deeper appreciation of our increasingly challenging and multi-faceted world. What is presented here is a welcomed signal of what is to come from this next generation of art-world-shapers.

Claudia Bohn-Spector, an independent curator in Los Angeles, CA, received her Ph.D. in art history from the University of Munich. She has previously curated numerous exhibitions, most recently a critically acclaimed survey of Los Angeles photography at the Huntington Library, entitled This Side of Paradise: Body and Landscape in L.A. Photographs (with Jennifer A. Watts). With Watts, she also organized Envisioning Eden: Water and the Selling of L.A. (1997) and The Great Wide Open: Panoramic Photographs of the American West (2001), which received the top exhibition catalogue award from the American Library Association in 2002. At the Getty Research Institute, she helped direct the international research and exhibition project Imaging the City: The Formation and Display of Urban Identities in the Americas, and authored August Sander: Photographs from the J. Paul Getty Museum (2000).

Sam Mellon is a visual artist, curator, and musician based in Los Angeles. In 2008, in conjunction with Outpost for Contemporary Art in Highland Park, he founded Open Gallery (with Kamil Beski), an exhibition space devoted to showing emerging conceptual artists. He has organized numerous exhibitions, including shows by artists Veaceslav Druta, Louisa Van Leer, Jed Lind, Jill Newman, Kris Cunz, Lindsay Foster (with Claudia Bohn-Spector), Olexander Gnilitsky, Pat Pickett, and Ed Gomez. As a musician he has produced two critically acclaimed albums, including Sam Mellon and the Skylarks' 2006 self–titled debut album and the forthcoming Listen to the Birds Sing You the Truth, scheduled for release in 2010. He currently serves as the director of Exhibition Services at Curatorial Assistance, an international
traveling exhibition service in Pasadena, after nearly a decade of preparing and installing exhibitions at the Los Angeles County Museum of Art. With Bohn-Spector, he is organizing Speaking in Tongues: The Art of Wallace Berman and Robert Heinecken.

(From left to right)