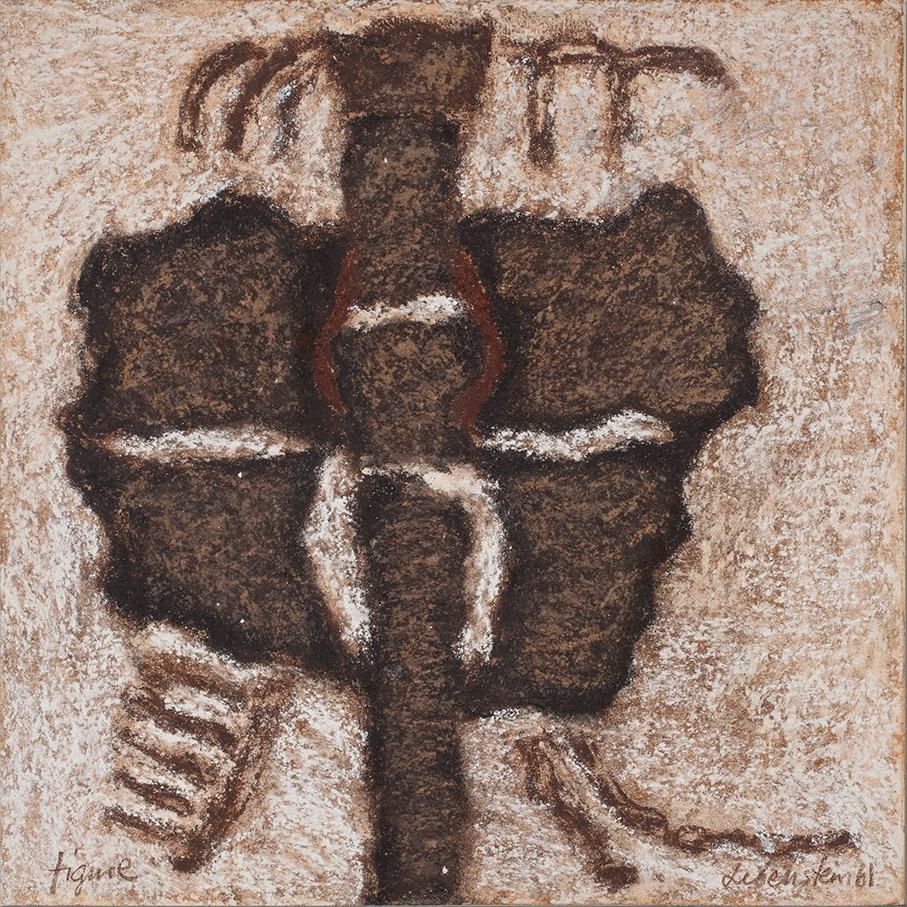 Escapes spanned four decades of Polish art created under communist rule. As the country was being redefined socially and politically, artists were seeking new visions. At times their creativity was greatly restricted by the state while at other times, they found ways to express their opposition. Drawn primarily from the Bohdan "Bo" W. Oppenheim and Sylwestrowicz Collection as well as the holdings of the Center of the Study of Political Graphics, Warszawa Restaurant, and Contemporary Posters in New York, the exhibition includes paintings, drawings, sculptures, and posters.

From about 1949 to 1955 the state dictated that all art was to be made in a socialist realist style using iconic figures to inspire the public and promote nationalist and socialist ideals. Artists who refused to tow the official line were excluded from public life. After the death of Stalin in 1953, the political atmosphere became more lenient, opening up opportunities for artists. In 1955 the exhibition Against War Against Fascism at Warsaw's Arsenal featured works by recent college graduates in protest against socialist realism and Stalinism. A second exhibition, at the House of Artists in Cracow, presented works by Tadeusz Kantor, Jerzy Nowosielski and others who merged surrealism and abstract expressionism. These exhibitions triggered an artistic explosion inspiring the creation of numerous artists' groups, clubs, and galleries. At the same time, artists began to re-establish relations with Western Europe, the United States, and the rest of the world.

Through the 1960s and 70s Polish artists developed their own unique styles bringing in elements from diverse movements from both inside and outside of Poland. Jan Lebenstein's grotesque figures of the late 50s and early 60s merged organic structuralism with abstraction. Wojiech Fangor went from creating socialist realist works in the 1950s to exploring the relationships between color and space in blurred, op-art abstractions in the early 1970s. Jerzy Nowosielski's work of the late 1970s alternated between figuration and abstraction. Barbara Pniewska's surrealist sculptures and assemblages are particularly striking when one imagines the surrealism of the actual communist experiment.

While artists experienced a great deal more freedom, isolation continued to pose a serious challenge until after the fall of communism. The early 1980s brought a new cycle of creative oppression when martial law was declared on December 13, 1981 to stop the Soiidarity trade union movement. Some artists continued to participate in official exhibition salons but others refused to participate in any government-sanctioned event. The Catholic Church became a significant haven for artists providing artists spaces (church buildings) where they could hold exhibitions beyond the reach of political censorship.

Poland's strong poster art tradition will be highlighted in the exhibition as well with a selection of works from the 1950s to the early 1990s. Pasted on walls in cities across Poland, posters served as a powerful tool throughout the communist era reinforcing the state's agenda. At the end of the 1940s, a small group of artists were asked by the Polish Film Department to design posters. The artists agreed with the stipulation that they could create works based on their own artistic terms rather than a typical advertising language. A new style characterized by surreal and expressionist tendencies, humor, and bold colors evolved. The posters publicized films, the circus, theater, opera, and exhibitions. Throughout the communist period, the state had a monopoly on the commissioning, production, and distribution of such work and enforced censorship. Nonetheless, the artists used subtle metaphors and humor to convey strong critiques of the political system in many of the posters. The exhibition will conclude with examples of Solidarity movement posters and post-communist images from 1990. Works by Waldemar Swierzy, Mieczylaw Gorowski, Andrej Krajewski, Tomasz Sarnecki, Lex Drewinski, and others will be included.

Dr. Witold (1922-1983) and Hanna (1923-2005) Dowoyna Sylwestrowicz began collecting art from their homeland of Poland in the 1950s after immigrating to the United States. They gathered an important group of contemporary paintings, tapestries, and sculpture with the assistance of Hanna's brother Bohdan Urbanowicz, an architect and professor at the Warsaw Academy of Fine Arts. The art filled a home especially designed by Urbanowicz where the Sylwestrowiczes welcomed artists, intellectuals, and academics. In 2005, Hanna bequeathed the majority of her collection to her nephew Dr. Bohdan "Bo" W. Oppenheim who lives in Santa Monica in a home also designed by his uncle Bohdan Urbanowicz. 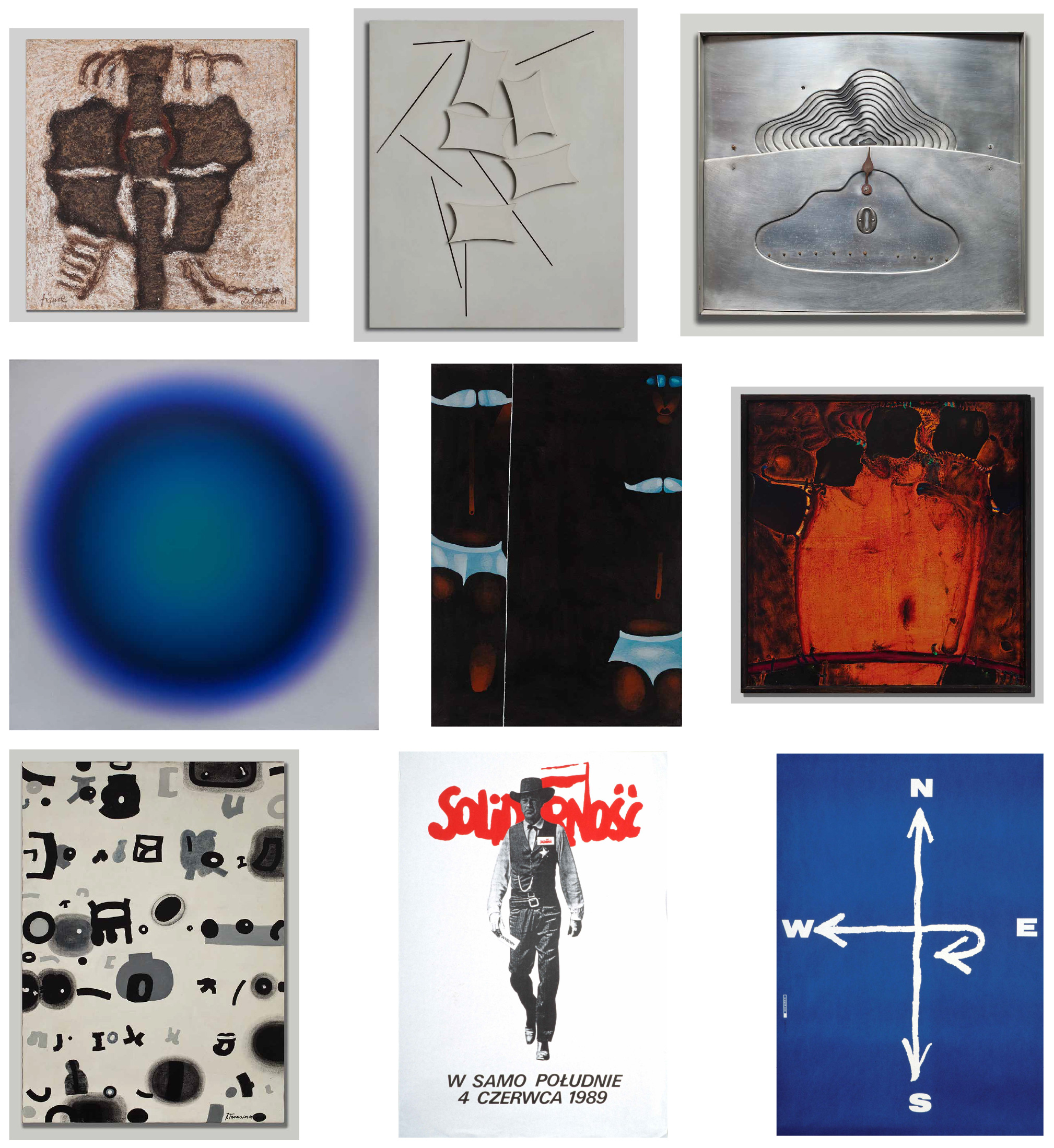 From top-left to bottom-right:

All works are from the Bohdan "Bo" Oppenheim and Sylwestrowicz Collection unless otherwise noted.