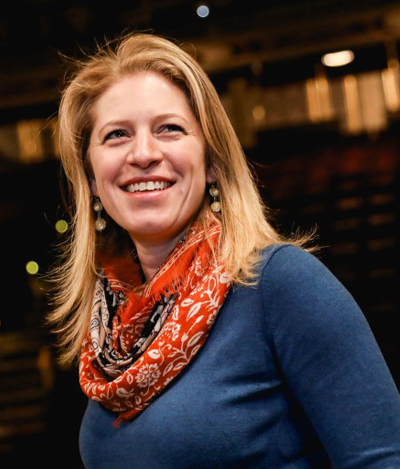 Amber White is the production stage manager for Hamilton: An American Musical on Broadway. Amber got involved in theatre purely by chance – through a work study assignment at LMU. After a 16-year career that has spanned from small regional theaters to spending the last two years working on the Tony Award-winning musical, she’s continually grateful for the experiences that led her to where she is today.⁠

“I honestly think that if I didn’t go to LMU, I wouldn’t be working in theatre today,” she said. “I started school there as an accounting major, and I got a job as a work study student in the theatre. The people I met there were so warm and welcoming that I fell in love with theatre and became less interested in reading my Wall Street Journal. I got to know the chair of the department, and the professors in the department, and it really helped drive me.”⁠

Amber changed her major to theatre arts, and began stage managing shows at LMU. She is also a Del Rey Players alumni, where she served as technical director. After these formative experiences, it was at the suggestion of a fellow LMU student that she apply for a position as a professional stage manager.⁠

Previous Broadway and Off-Broadway credits include In the Heights, Avenue Q, The Miracle Worker, Million Dollar Quartet, and Carrie. She has worked on the National Tours of White Christmas, Wicked, Dinner With Friends and has also taken the Ball Room dance extravaganza Burn The Floor around the world to Japan, Australia, China, Canada, and across the U.S.