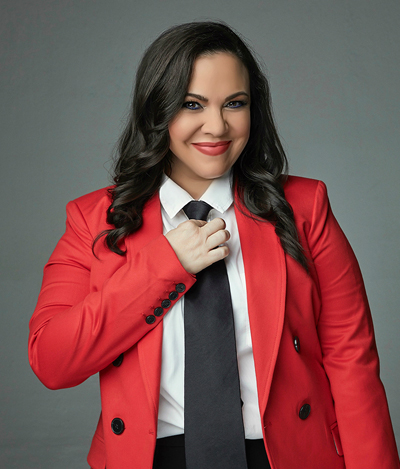 Gloria Calderón Kellett is the executive producer, co-showrunner, director and actor on the critically acclaimed Netflix reimagining of the classic sitcom One Day at a Time. Previously, she was a writer and supervising producer on the CBS series Rules of Engagement, and a writer and producer on the CBS series, How I Met Your Mother for three seasons, during which she won an Alma Award for Outstanding Script. She is a graduate of the Writer's Guild Showrunner Training Program and has sold pilots to FOX, ABC, CBS and is working with Eva Longoria on a pilot for TVLAND.

Gloria graduated from Loyola Marymount University and was awarded a Kennedy Center/ACTF Award for her first play, Plane Strangers – which also went on to win the Del Rey Players Playwriting Award, and the LMU Playwright of the Year Award. Gloria went on to earn a Masters degree in Theatre from the University of London. Her play, When Words Are Many, was a finalist for the London Writers Award. Additionally, her play, Dance Like No One's Looking, won the International Student Playscript Competition, judged and awarded by Sir Alan Ayckbourn. While in London, she worked at the Royal Court Theater and LIFT (the London International Festival of Theatre).

Since her return to Los Angeles, Gloria has been a founding member of the sketch comedy group And Donkey Makes Five, and has written and performed stand-up comedy at The Improv and The Comedy Store. Her book, Accessories, has been translated into Italian and is published by Small Fish Studios in the U.S. and Cassini Press in Italy.